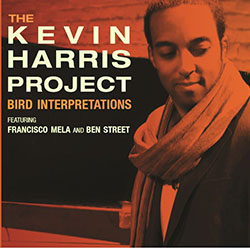 In 2015, Harris released his 5th album 'Bird Interpretations' a pianist perspective on the music of Charlie Parker. The exciting new trio album exhibits captivating dialogue by Kevin Harris (piano), Francisco Mela (drums), and Ben Street (acoustic bass). In choosing to interpret some of Charlie Parker's repertoire, Harris seeks to echo the inspiring effect that Bird's music has had on generations past and present, as well as documenting his own progress as a jazz pianist. As Parker's musical journey began in Kansas City to be later defined in New York City, Harris' playing certainly presents a contrast informed by geography. The understated elegance and soulfulness of his native Kentucky coalesce with the elevated energy and the hustle and bustle of his adopted hometowns, Boston (MA), and New York City, make him a highly unique person and musician. Harris has also garnered praise and recognition for his distinctive combination of traditional and contemporary music, within which he consistently, and naturally, explores these various elements of his life.